How effective was the United States in achieving their goals through the use of Cold War policies?

The Cold War set the tone for American foreign policy for forty-five years. How effective was the United States in achieving their goals through the use of Cold War policies? 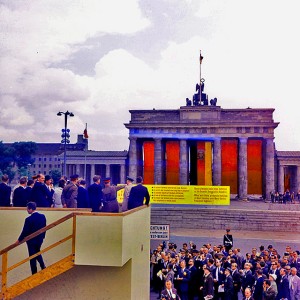 In 1947, George Kennan helped shape the course of the United States cold war policies in his article, The Sources of Soviet Conduct.  Kennan’s policy of containment became the cornerstone of U.S. cold war policy and as such is an appropriate framework to understand the original goals of American foreign policy during the cold war and craft a perspective on policy effectiveness.

Kennan summarized that capitalism and communism are inherently at odds given communism’s basic tenets; that “the capitalist system of production is a nefarious one (X, 1947, p. 566)” and is incapable of fair distribution of resources; capitalism in its final phase leads to imperialism and war; and finally, revolutionary transfer of power to the working class is inescapable (X, 1947).

Kennan believed that communism was a system that could, and would eventually fail of its own accord, based on his belief that, “If, consequently, anything were ever to occur to disrupt the unity and efficacy of the Party as a political instrument, Soviet Russia might be changed overnight from one of the strongest to one of the weakest and most pitiable of national societies” (X, 1947, p. 580).  He also argued that no state of affairs supports indefinite frustration without eventually righting itself (X, 1947).

As a result, Kennan argued for, “a policy of firm containment, designed to confront the Russians with unalterable counter-force at every point where they show signs of encroaching upon he interests of a peaceful and stable world” (X, 1947, p. 581)  In addition, Kennan believed that the United States needed to create an impression that its system had a, “spiritual vitality capable of holding its own among the major ideological currents of the time” (X, 1947, p. 581).  Three decades later, Reagan upheld Kennan’s view in his presidential candidacy announcement when he said, “A troubled and afflicted mankind looks to us, pleading for us to keep our rendezvous with destiny; that we will uphold the principles of self-reliance, self-discipline, morality, and—above all—responsible liberty for every individual that we will become that shining city on a hill” (Reagan, 1979).

Therefore, our measure of policy effectiveness must examine two things; the degree to which communism has been contained and the role the successful example of the United States played in communist containment.

Moss and Thomas, document the fall of communism suggesting, “In rapid succession, the Soviet empire in Eastern Europe collapsed, the Soviet Union itself disintegrated, and Communism as an ideological alternative to Western liberal capitalism disappeared into the ash heap of history” (Moss & Thomas, 2010, p. 266).  It is worth noting, that Cuba, North Korea, Laos, Vietnam and most importantly China are still communist; that both Nepal and Cyprus have ruling communist parties; and that a number of nations have active communist parties, including both South Africa and Brazil; and so while communism can be considered contained, it has hardly disappeared.

What role did the successful example of the United States play in the eventual demise of the Soviet Union?  It is my hypothesis that people who had a desire for liberty were responsible for the fall of communism and that the United States provided the contrast needed to create a desire for change.  In his speech dissolving the Soviet Union, Gorbachev told his countrymen, “A breakthrough has been achieved on the way to democratic changes. Free elections, freedom of the press, religious freedoms, representative organs of power, a multiparty system became a reality; human rights are recognized as the supreme principle” (Gorbachev, 1991).  The principles Gorbachev spoke of are clearly a of model of the principles of western governments and the United States in particular.

While our cold war policies have had a tremendous cost, that perhaps even yet have not been fully understood, it is clear that our policies were highly effective at containing communism.  It is equally clear that the principles upon which our government is based serves as an example to the people of more repressive governments; of the possibility of a future where life, liberty and the pursuit of happiness can be obtained.  Time and again, people around the world, whether discussing our own revolution, the tearing down of the Berlin Wall, the demonstrations in Tiananmen Square, the anti-apartheid movement of South Africa or the more recent demonstrations in the Middle East, clearly desire freedom as their natural and desired state; and are willing to risk life and limb to obtain it.   The human desires for self-direction, mastery and purpose are at the heart of the fall of communism and Kennan knew this in 1947, as did Reagan in 1979.  Kennan demonstrated a fundamental understanding of both of the Russian people and more importantly human nature and shaped a policy designed to politically and economically contain communism until it changed from within, which appears to the observer, to be exactly what happened.  I do wonder whether there was an approach that was less costly in both economic terms and in the human cost.