← Outsourcing: Symptomatic of the Transition to the Idea Economy
Endogenous Growth: The Future of U.S. Economic Dominance through Technology → 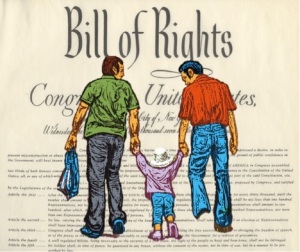 Last week, gay marriage and civil union legislation played out in legislatures across the country with varied results (Associated Press, 2012).  In New Jersey, Governor Christie vetoed gay marriage legislation that had made it through the legislature, while in Washington state, Governor Gregoire signed similar legislation into law (Associated Press, 2012).  Meanwhile, in Colorado, the Colorado State Senate Judiciary Committee recently weighed in on civil union legislation, voting in favor by a 5-2 margin (Moreno, 2012).  The bill is expected to get through the Democrat-controlled Senate, while facing a tough fight in the Republican-controlled House (Moreno, 2012). At stake in the religiopolitical debate are minority rights, equality, the legal and social definition of marriage and family; perhaps even our national character and the separation of church and state.

As the debate rages anew here in Colorado, familiar arguments from well-trenched positions have reemerged in the battle, as supporters argue for fairness, equal rights, and legal protection for same-sex couples and their children (Bartels, 2012).  While opponents argue that same-sex couples are immoral, that civil unions will lead to same-sex marriage, that marriage is between a man and a women, and that to allow same-sex marriage or even civil unions will lessen traditional marriage and by extension society (Bartels, 2012).  In addition, opponents frequently argue that children are better off when they have a mother and a father.  What should Coloradans make of these arguments?

Gay couples face overwhelming discrimination as the price of their sexuality; discrimination that is “baked” into the legal system, tax system, into the very fabric of society.  For example, Bernard and Lieber (Bernard & Lieber, 2012) found that gay couples would incur between roughly $41,000 and $460,000 dollars in additional costs over heterosexual couples, as a result of being in a committed, lifelong, same-sex, relationship.  The additional costs came from increased tax liability, reduced benefits, and increased legal costs (Bernard & Lieber, 2012).  The lesson for gay couples is simple; it pays to be straight.

Discrimination also occurs in the legal system, where despite anti-discrimination legislation, judicial stereotypes and bias in child custody cases is still a pervasive problem (Kendall, 2003).  Kendall (2003) finds that:

The judicial animus in these cases is directed at adult lesbians and gay men, the true brunt of the discrimination is borne by their children, who are inevitably harmed by decisions that undermine their love and respect for their parents and their pride in their families-and, by extension, themselves. (p. 1)

The irony in the situation is thick, as many opponents of civil union and same-sex marriage are arguing that gay parents somehow harm their children, a point of view recently articulated by GOP presidential contender, Rick Santorum (Krasny, 2012).  While Santorum lacked specifics on how specifically children of gay parents are harmed (Krasny, 2012), Zach Wahls, a University of Iowa student and Eagle scout that happens to be the child of a lesbian couple was eloquent in front of the Iowa legislature as he argued that “the sexual orientation of my parents has had zero affect on the content of my character” (James, 2011, p. 1).

Of course, it isn’t surprising that Zach turned out fine, despite having lesbian parents. Social science research has found “that children who grow up in homosexual families are much like children who grow up in heterosexual families” (Brym & Lie, 2007, p. 316).  Moreover, the scientific research is so overwhelmingly consistent, that the American Psychological Association (2004) issued a policy statement indicating that 1) they support legal protections for gay couples and their children, 2) they support protection of the parent-child relationships of same sex parents, 3) they will take a leadership role in opposing discrimination based on sexual orientation, and 4) they will take an active role informing public discussion and policy development.  In summary, gay couples face ongoing discrimination in a variety of social institutions resulting in higher costs, less rights, and fewer legal protections than similar heterosexual couples, despite scientific research that suggests equal rights for same-sex couples would benefit society.  Why does civil society work to prevent gay couples from equal rights?

The simple answer is likely religion, or more correctly, the religiopolitical perspective shared by lawmakers and clergy, whose origins are scriptural in nature.  According to Brym and Lie (2007), many in the United States are part of a vast religious revival, while others are increasingly secular, “resulting in a world that is neither more secular, but one that is certainly more polarized” (p. 343).  Nowhere is polarization more apparent than in the gay marriage public debate.  Despite the founder’s intention to separate church and State, religion clearly holds sway in political life.  As the Colorado Senate Judiciary Committee considered the civil union legislation, whose testimony opposed civil unions?  It was clergymen from both Catholic and Evangelical Churches, arguing that “homosexuality is immoral“ (Bartels, 2012, p. 1) and “anything that lessens [traditional marriage] lessens society at large. Marriage is the cornerstone of society” (Moreno, 2012, p. 1).   Conservative members of the GOP echo their reasoning, as if in one voice.  GOP contender Rick Santorum argued that “The uniqueness of marriage is it provides an intrinsic good to society” (Krasny, 2012, p. 1).  The gay marriage debate has demonstrated that church and State are bound together, seeking to use the definition of marriage as a legitimizing myth to prevent gay couples from participating equally in a civil society; their position a moral argument, rather than a legal one.

States legislatures and citizens across these United States are in the midst of determining whether gay people will receive equal rights and treatment under the law.  At stake, is more than the welfare of gay couples and their children.  Rather, the outcome of this debate will have implications for our national character and perhaps even more importantly, set the stage for the degree to which the United States will behave as a theocracy.  The XIV Amendment of the Bill of Rights is clear, stating “No State shall make or enforce any law which shall abridge the privileges or immunities of citizens of the United States…nor deny to any person within its jurisdiction the equal protection of the laws” (United States, 1868).  How then, can we citizens of these United States allow discrimination of gay couples?  There is no place in this debate for moral arguments, as the Bill of Rights is clear; the debate is about what is legal and what is right.  Who are clergy members to deny a person their rights based on a moral argument?  More importantly, who are we as citizens to deny gay couples their rights?  Providing equal protection under the law is an easy decision.  Deciding whether we will allow the U.S. religious revival to dominate politics to the point that citizens lose their civil rights is proving to be a tougher debate.